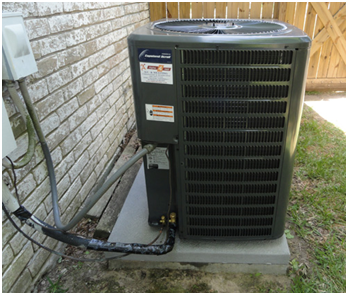 Your home’s air conditioner’s job is to move heat from inside your home to the outside, thereby cooling you, your home and your family.

Air conditioners blow cool air into your home by pulling the heat out of that air.

How Your AC System Works

The air is cooled by blowing it over a set of cold pipes called an Evaporator Coil. This works just like the cooling that happens when water evaporates from your skin. The evaporator coil is filled with a special liquid called a refrigerant (Freon), which changes from a liquid to a gas as it absorbs heat from the air.

The Job of the AC Compressor

If the refrigerant charge on the system leaks out, it lowers the capacity of the system. You will simply get less cooling and system will not be able to keep up when the load gets high.

If you produce more heat indoors either from having more people or appliances or because of changes in the house, the air conditioning may not be able to keep up.

It’s a good idea to brush dirt and obstructions from the coils and the drains at the start of each cooling season.

Depending on the system and the consumer, this may require a service call from an Ac repair professional like Alpha 4 Real AC & Heating, your Katy, Houston and Sugar Land, TX AC repair specialists. If the system is not producing as much cold air as is normal, it could also be an indication of a refrigerant charge or airflow problems. These problems may require servicing.

– Routine maintenance such as changing filters can be handled by most consumers, but others require professional service. 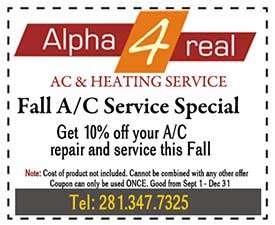 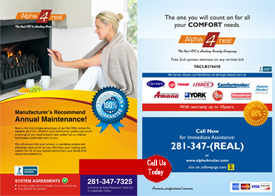